Controversial Evidence Rosa Parks was Menstruating, Not Protesting to be Tampax® Commercial 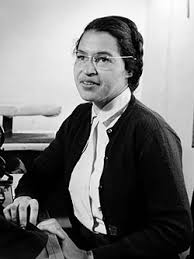 Rosa Parks the day she was allegedly menstruating

Long considered "the mother of the freedom movement" for her refusal to give up her seat in the "colored section" of a bus to a white passenger, Rosa Parks may not have been battling racism, but acute menstruation, researchers at Troy University announced earlier this year.

Forensic test results from the underwear and skirt she wore that day were positive for menstrual blood, and the new controversial theory resulted in heated and emotional diatribe in the media, and death threats for the researchers. With the media attention still strong many months after its debut, Tampax® has announced plans to re-enact the famous civil rights incident in a series of commercials targeting young women with career aspirations.

"Being asked to move to another seat is one thing," said a spokeswoman for Tampax®, "but not being able to stand up because of heavy flow is another kind of suffering that we want to liberate women from. Where is the justice when a woman can't stand at the back of a bus because of the fear of menstrual spots?"

Where is the justice when a woman can't stand at the back of a bus because of the fear of menstrual spots?”

Rosa Parks during her menstrual years

Rosa Wouldn’t Have Died Single & Alone if She Had Tampax®

Industry advertising publications speculate that the commercial will play on the fact that Rosa was single and without kids by having her unable to stand up in the bus because her heavy flow had stained her dress.

“I think they’re going to put a man on the bus who Rosa likes, and he’s going to ask her out and she’s going to have to say no because she doesn’t want him to see her flow,” said Jed Hartman, a magazine editor in Manhattan. “What I would do is have her get arrested, but it’s really no big deal because what she is thinking about is the man that got away because of her heavy flow,” Hartman added. “Yea, I’d show her die alone because she didn’t have Tampax®, that’d be the perfect ad,” Hartman said.

“Yea, I’d show her die alone because she didn’t have Tampax®, that’d be the perfect ad,” Hartman said.

I want to see the evidence.