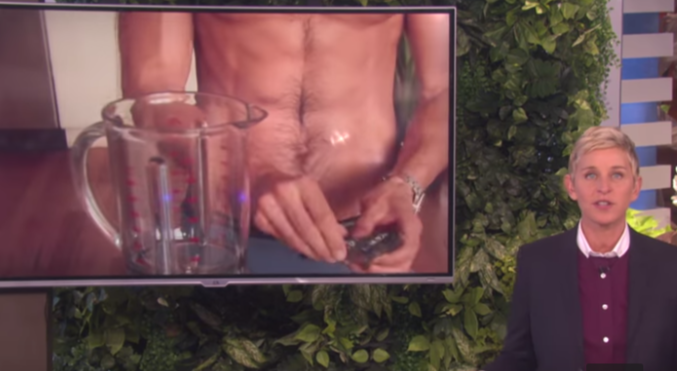 Ellen DeGeneres stood back and laughed as Chippendales dancers were groped by powerful women and then forced to touch them erotically. Or that’s how some people saw it.

“I couldn’t believe she [Ellen] was just standing there and laughing while I was being groped by this married woman,” a Chippendales dancer who didn’t want to give his name (lest he lose future work) said. “We’re expected to just put up with it because these women are powerful and they know we need the work. If I say anything, I am not going to be hired back, let’s face it.” 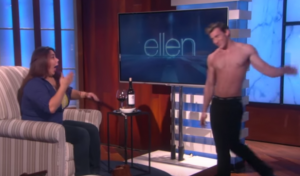 Other Chippendales dancers (also speaking only on the condition of anonymity) made similar statements, described being groped “as a joke” and forced to simulate sex acts.

“They think it’s ok because they’re paying us, they think they can just touch us any way they want and make us do the same to them. I can’t say no or I lose a high-paying job,” another said.

“You know, as accusations of all this sexual indecency has blazed through Hollywood, one thing you keep seeing is Hollywood thinks its funny to grope or to simulate sex acts,” said “Randy”. “No one asked me if I think it’s funny. No one asked me how I feel,” Randy said as he started to cry. “I hope these high-profile women are forced to stop and think about what it’s like to be a Chippendales dancer, when the highlight of your week is having gross women running their hands on your body and squeezing you,” Randy said as his boyfriend “Jackson” comforted him.

Ellen isn’t the only high-profile woman to exploit and objectify men, but she is one of the more rampant violators (in fact, we couldn’t include all the episodes in this article…one would have to write a book on the subject), often bringing handsome men on her show to take their clothes off, be touched, or to touch mostly high-profile women. We couldn’t find any men who said they weren’t asked to do these things, and all of them said these degrading acts were part of the job. We also couldn’t find any men who said they were financially capable of not taking high-profile work such as “ellen”. 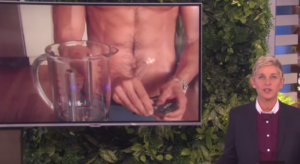 Ellen forced Peruvian chef to take his clothes off while cooking

“For me and probably every other guy, being on ‘ellen’ is pretty much the highlight of your career. You just can’t say no, you have to do it,” one man who used the alias “Sam” said. Sam, who is gay, said his partner would see him on television being groped “and he’d just break down and cry. He got so jealous he broke the bathroom mirror with a picture of Ellen we had hanging on the wall. But the next day, we just cleaned up the mess and never spoke of it again, because we both knew if the show called again, I was going to do it because we need the money.”

In another episode, a Peruvian chef named Franco Noriega shows how he prepares a meal while half naked.
“That was just a disgrace,” said “Jake”, a barista at Starbucks and exotic dancer. “Here you have a chef trying to make a name for himself, trying to develop a career and be respected as a serious culinary artist, and Ellen pays him to take off his clothes and degrade himself.”

Men are scared to come forward with these allegations because they’re scared they’ll look like less of a man.”

Men are not in a place to complain about this kind of exploitation, “Jake” says, for the same reasons men are taught they shouldn’t cry or show their emotions. “Men are expected to just tough things out, which means not complaining, not crying. Men are scared to come forward with these allegations because they’re scared they’ll look like less of a man.”

“Jake” explained the anonymity demanded by the dancers with the same reasoning, saying, “Sure they are worried about losing work and money, but there’s more to it than that. When was the last time you heard a guy come out and complain about being touched the wrong way? You think it never happens? No, it happens all the time, just look at the business Chippendales is doing. Women can come out and complain that someone pretended to touch their breasts in a photo as a bad joke and that can ruin a professional career, but at the same time we have Ellen DeGeneres and others doing worse to men every week on national television with millions of people watching and no one stops for one second to think about these guys and they know that, they’re terrified of complaining because there is no place in our society for men to be victims of sexual improprieties.”